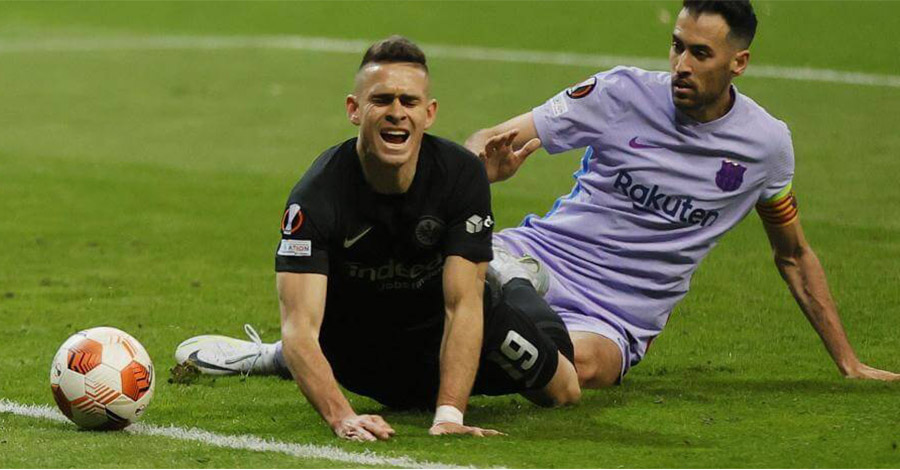 The VAR was right last night at Eintracht Frankfurt-FC Barcelona, ​​according to sources consulted by Mundo Deportivo, in the decision to annul the penalty that the Serbian referee Srdjan Jovanovic initially pointed out by Sergio Busquets on Santos Borré.

It was surprising that initially, the image did not appear on the television broadcast to prove that the azulgrana touched the ball before sweeping the player from the German team. This is explained because, in each country, UEFA grants a local operator the one in charge of making the signal of the matches of the European club competitions. Be it the Champions League, Europa League, or Conference League. In Spain, the company Mediapro is responsible for making this signal.

The director of the broadcast of the match is the one who decides what images are broadcast during the game. Initially, as proven later, the photos were not released, which made it clear that there is no maximum penalty at the Barça player’s entrance.

The images did exist within the multiple cameras used in the meeting. All of them are handled in the VAR room located in the mobile unit outside the stadium. The sequence was taken by UEFA’s two VAR referees appointed yesterday for the match. These are the Dutch Pol Van Boekel and Dennis Higler.

And as soon as they analyzed this sequence, which until then had not been shown on the broadcast, they notified the Serbian referee to correct his initial decision to consider Busquets’ action as the maximum penalty. It was then that Jovanovic approached the monitor where that image was thrown at him that they handled in the Video Arbitration room but that until then had not appeared in the broadcast of the match. The Serbian, seeing the sequence, did not hesitate to correct his decision and annulled the penalty that he had indicated minutes before.

Once the referee made the decision, it was when the mobile unit decided to launch on television the image that the VAR had used to correct the initial decision of the Serbian referee. It was then that the whole world saw the sequence that proved that the maximum penalty did not exist.