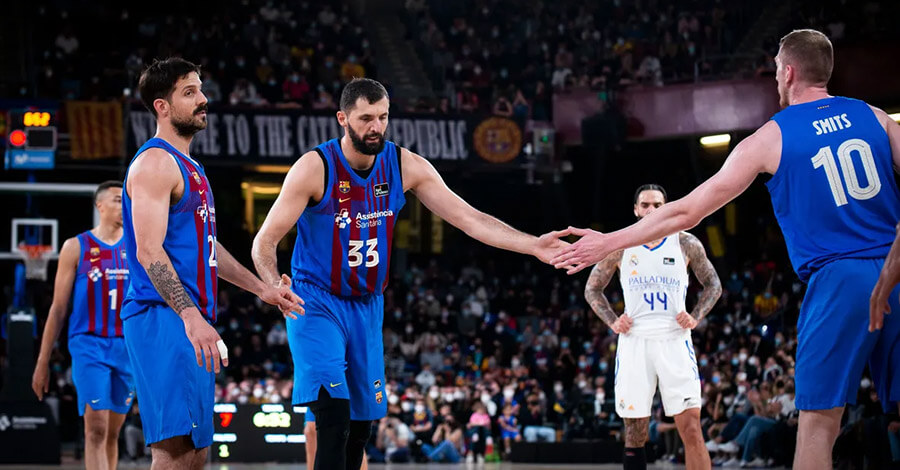 The azulgranas won a game marked by the high intensity of both teams thanks to an extra-time dominated at all times by Saras’s men.

Champion team triumph (108-97). During the last minutes of regulation time and extra time, an exercise in character and perseverance allowed the azulgranas to bag another Clásico and increase the gap to three wins over Real Madrid in the ACB.

The blaugranes have known how to adapt to the whites’ high intensity and have given the fans a new joy, which will allow the Catalans to face the decisive stretch of the season in the best possible way. With a rating of 24 points, Dante Exum has been chosen MVP of the match. Nicolás Laprovittola, with 20 points, and Nick Calathes, with five assists, accompanied the Australian player’s offensive talent.

The applause from the Palau Blaugrana for the players of the first team of the women’s basketball section for their promotion to the Endesa Women’s League was the perfect introduction to the first few minutes marked by Barça’s scoring success. The offensive joy in which the cast of Saras Jasikevicius was immersed received a further breath of fresh air when Dante Exum finished a quick culé action with an impressive one-handed mate who connected the heat from the throats of Palau with the beautiful moment of the Barcelona team. In this way, dominating both phases of the game, the first quarter ended with an exciting 27 – 23 in favor of the azulgranas.

However, Real Madrid was unwilling to become a mere spectator of the culé party. Thus, thanks to a greater intensity in defense of the paint, Pablo Laso’s men have managed to stop the azulgrana gale and reduce distances in the electronic to the point of leveling the match (38-38). However, Barça’s response to the good minutes from Madrid was exemplary. Always showing the competitive character that characterizes Saras’s men, the locals were able to go into the break with an advantage of +5 thanks to a prodigious triple under the buzzer by Nicolás Laprovittola (51-46).

They take distance from the triple

After the break, the azulgranas continued the success from the line of three started by Laprovittola. Nikola Mirortic and Rolands Smits have joined the Argentine’s party with two sublime wrist blows that have catapulted the Catalans to reach a lead of +10, the maximum since the start of the duel. With this new context, Saras’ men have been able to face the game’s final stretch by leading the score (71-65).

They force the extension in the last play

In the last act of the confrontation, both forces were equalized. Aware that the result shown by the email was inferior to the superiority shown by the Catalans during the first 30 minutes, Whites, making internal dominance their main weapon, dried up the distance achieved for the Catalans until they equaled the match again ( 80-80).

After an arbitration decision, deliberate with the video review, which has ended with the expulsion of Mirtoic and Abalde, the last five minutes have been box or belt. When there was more pressure, the magic of Palau has joined with the heart and ambition of the Barça players to create a unique symbiosis that has allowed the culé team to force extra time in the last second of the match following a free shot converted by Sanli (89-89).

Having overcome the Madrid scare with an extraordinary dose of epicness and personality, the azulgranas have shown their superiority by completing an almost ideal extra time. Hayes’ poise, a new imposing mate from Dante Exum, and a defensive intensity worthy of admiration have just driven the Barça fans crazy, who have once again seen, in the first person, a Barça-colored Clasico (108-97).